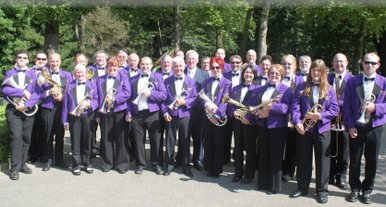 Mereside Brass is a  brass band based at currently based at the 'Venue' in Rudheath, Northwich.  Mereside Band is led by Musical Director Mike Phenton. The band was established to allow people to have fun while playing and achieve their musical potential.  The Musical Director has focused on ensuring the band play a wide variety of modern music mixed with some traditional brass. This is to ensure the band entertains as well as appeal to a wide variety of musical tastes.

The bands repertoire varies from classical and traditional brass right up to modern musicals, movie scores and pop.  The band is made up of many talented musicians from all over the Cheshire area who have extensive brass and musical backgrounds.

Musical Director, Mike Phenton, and the rest of the band Management Team have kept a constant eye on the prime objectives for which this band was established:

•    To provide quality concert music in & around the North West

•    To provide a training-ground for young players

•    To compete in Competitions with a focus on improving the band.

The History of "Bringing Brass to the Heart of Cheshire"

In 2002 the Band on its formation was awarded an initial grant from the Manchester Airport Community Fund for the purchase of printed music & stands. In addition the JPD Group offered ongoing sponsorship. In 2005 as recognition of their success Manchester Airport awarded the band with a second grant for bannerettes and more music.

At the beginning of 2007 Richard Branson's new company Virgin Media was formed and Mereside Brass successfully secured a twelve month sponsorship deal which has enabled them to form a Training Band. During, July 2008 the band embarked on a successful tour of the Rhine valley in Germany and 2009 followed a training weekend with Fodens and Katrina Marsella the World Famous Baritone Musician.

In 2010 Mereside Brass decided to embark on a journey to improve the band’s ability to play together and entered their very first competition. The band learned a lot from the experience and decided to enter again in 2011 to build on that journey.  They surpassed anyone’s expectation’s by achieving 14th from a line up of 25 bands in the North West Regionals Fourth Section.

In 2012 the band decided it was time for another tour in Europe in and embarked on a four country tour around Holland, Germany, Belgium and Luxembourg.  The tour was a success and was the perfect way to celebrate the band bringing brass to the Heart of Cheshire for 10 years.

In 2013 the band has some new challenges and plans which include another visit to the North West Regionl Brass Band Competition in Blackpool, a Musical Workshop Training Weekend led by famous musicians and more concerts around the UK.

In 2015 the band had a great time whilst playing and  touring in the Black Forrest.

In 2017 Mereside Brass went on another very enjoyable band tour and performed at  the Isle of Man playing at Ramsey, Laxey and Castletown.  The band also joined forces with Crosby band and played with them at one of their rehearsals.  Unfortunately,  due to adverse weather conditions, the band  were unable to play at Douglas but hope to visit again when this will hopefully be  rectified.  The band also celebrated its 15th anniversary with a meal and an anniversary cake on the final night of the tour.

In 2019 Mereside Brass returned to the Isle of Man to perform at the Villa Marina, Douglas to do a joint concert with the Crosby Band.  After 2 joint rehearsals on 2 consecutive evenings with Crosby Band  we put on a great performance in front of a well attended audience.  A fantastic evening was had by both our bands and the audience too.

In 2019 Mereside Brass changed rehearsal venues and we are now based at the 'Venue' in Rudheath, Northwich, Cheshire after moving from Plumley Village Hall, Knutsford.